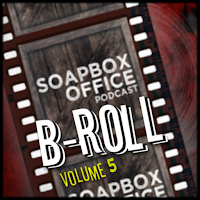 The boys still find themselves confounded by Field of Dreams.

B-Roll is an audio bridge of sorts between full episodes of Soapbox Office, featuring extra or expanded discussion left out of prior episodes in addition to brand new unedited conversation covering a wider range of topics and general day to day operations.

Mitch and Josh start the latest B-Roll with a major announcement about the Michael Parks documentary! In this edition, we examine Josh being an idiot and giving up his cushy day job at a major corporation to instead chase down independent work. Mitch takes his turn being a moron by choosing to watch Justice League rather than The Punisher, and the boys talk over their Turkey Day plans!