This week, Faults in the Vaults pauses to bring you another installment of Drinking & Drive-ins - the segment where we kick back and revel in some of the very best cinematic exploitations from the heyday of the local drive-in to the birth of the multiplex and beyond.

This time, we pay tribute to the passing of another icon of genre cinema, the great Tobe Hooper, director of such classics as The Texas Chainsaw Massacre 1 & 2, Salem's Lot, and Poltergeist! Kick back with one of our customized cinema cocktails and listen as we take a look back at his epic Sci-Fi/Horror space oddity, Lifeforce (1985)... 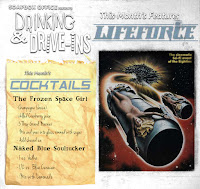 Josh goes Digging Up The Docs to introduce the initiated to the world of theatrical music composition with Matt Schrader's Score: A Film Music Documentary (2016).

The Soapbox Rant takes issue with the erasure of established sequel continuity in film franchises.


Also in this episode, Josh takes ill while Mitch takes issue with David Lynch and Christopher Nolan, Kingsman reviews, and plenty of love for Scream Factory!