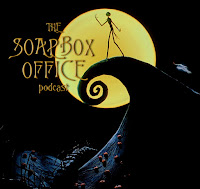 This week in Faults in the Vaults, we venture into the weird with two stop motion animation films presented by the macabre minds of Tim Burton and John Roecker. We stuff Nightmare Before Christmas (1993) back into the bag and deliver Live Freaky Die Freaky! (2006) unto the masses.

Be sure to stay for the special Spotlight Interview with John Roecker, the mind behind Live Freaky Die Freaky! Mitch dips back into the Mailbag to field a question about film pitches for the Man of Steel. Josh makes an argument against the flagrant abuse of satirical April Fools articles in The Soapbox Rant.

This Week in Torrents has Josh bringing attention to a little seen early Tim Burton effort, Hansel and Gretel (1983). Slipping Through the Tracks has Mitch abusing the residual goodwill left from his last pick in order to build a case for the audio time capsule that is 1997's A Life Less Ordinary soundtrack.

Plus! Another brand new segment debuts, Alternate "REEL"alities, thanks to Raleigh {Beer} Soapery.