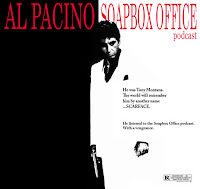 Ralph Garman (KROQ's Kevin and Bean) joins us to talk about his humble Philadelphia roots, how he became a top voice actor, and Al Pacino, which happens to be the theme for this week's Faults in the Vaults.

We also celebrate our recent iTunes "New and Noteworthy" status! After, we recap The Mission premiere, reintroduce a certain robotic counterpart, and dig into the mailbag to answer some fan queries.

As mentioned above, this week's Faults in the Vaults serves up a double shot of Pacino.

This week, Mitch & Josh talk about a trip to Norco, CA where they covered Michael Parks as he received his lifetime achievement award from the Norco Film Festival. We also take the opportunity to spill the beans on our next major project, a documentary on the man himself, Mr. Michael Parks!

In yet another act of shameless self-promotion, we speak about the upcoming LA screening of their new short film, The Mission as part of the HRIF Fest, and hypothesize about using the bathroom in white pants...

During This Week in Torrents, Dr. Josh teaches the class about the concept of the Open Matte film and why it is of significance to us! A new segment, The Soapbox, is introduced wherein Mitch attempts to explain his lack of enthusiasm for audience participation, much to the chagrin of audiences everywhere.

Lastly, Faults in the Vaults serves up a double-dose of Audrey Hepburn as we skip meals and take a pass on Blake Edward's Breakfast at Tiffany's (1961), then hole up inside and shine a light on Terence Young's Wait Until Dark (1967). 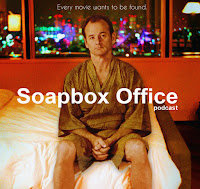 We start off the episode with Super Bowl shenanigans! Josh regales us with the legend of the One-Eyed Giant Purple People Eater of Anaheim, while Mitch analyzes the concept of kids singing about their own procreation!

They then detour in order to shame their listeners for not sending in hate mail (SoapboxOffice@yahoo.com). This Week in Torrents highlights the rarely seen Justice League of America CBS TV pilot from the Dark Ages of comic book adaptations that was 1997.

Lastly, Faults in the Vaults presents a tale of two Murrays! We buy a return ticket for Sofia Coppola's Lost in Translation (2003) and then take up the case for Jim Jarmusch's Broken Flowers (2005). All theme songs are made by Cameron Mosavian and are taken from the score to Josh and Mitch's film The Mission!

For our second episode, we're bringing the best and worst of what documentary features have to offer. This week, Faults in the Vaults fixes the crosshairs on Michael Moore's Bowling For Columbine (2002) and then Samuel Fuller and Jim Jarmusch take us on a journey across the River of the Dead to track down the elusive Tigrero (1994), directed by Mika Kaurismaki.

As a special treat, we gained the privilege to interview Samuel Fuller's wife, Christa Lang-Fuller about the origins of Tigrero, it's connection to Orson Welles, and the upcoming Samuel Fuller documentary, A Fuller Life. Elsewhere, Mitch speaks of his involvement in the upcoming documentary, Smoke and Mirrors: The Story of Tom Savini and Josh sheds a light on a 2012 Master Class w/ Werner Herzog as part of This Week in Torrents.

Additionally, we announce the Premiere of our new film, The Mission, which will be held at 11AM on February 20th at Regal Cinemas at LA Live in Los Angeles CA (as part of the Hollywood Reel Independent Film Festival). All theme songs are made by Cameron Mosavian and are taken from the score to Josh and Mitch's film The Mission!